April 1947 -The Children’s Club, Mylapore was founded in April 1947 in accord with the vision of Smt. Savitri Srinivasan. This vision was given shape and expression by Mrs. Pattu Balagopal through her devotion and managerial skills over 4 decades.

Drawing and painting classes have continued since 1947, with services provided by distinguished artists like the National Professor L. Munuswami, Mr. Arnavaz Vasudev of Cholamandalam and Ms. Shoba Dey of Shanti Niketan.

August 1947 - The club entered the public domain by presenting a colourful pageant of Indian history from Buddha to Mountbatten on the first Independence Day of the nation, 15th August 1947. Our patron the late Mr. T.R. Venkatarama Sastri presided.

February 1954 - The club was registered as a Society.

March 1966 - The club building was opened by Mr. Bakthavatsalam, the then Chief Minister of Tamil Nadu on 25th March, 1966.

April 1987 - Cricket coaching for boys of 8 to 13 years was inaugurated by former cricketer, Mr. Krishnamachari Srikanth.

A unique programme of science lectures on interesting topics was inaugurated in April 1987 for Std XI and XII.

Within 2 years, the club was providing table tennis and chess coaching for children under 15 years. 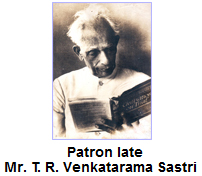